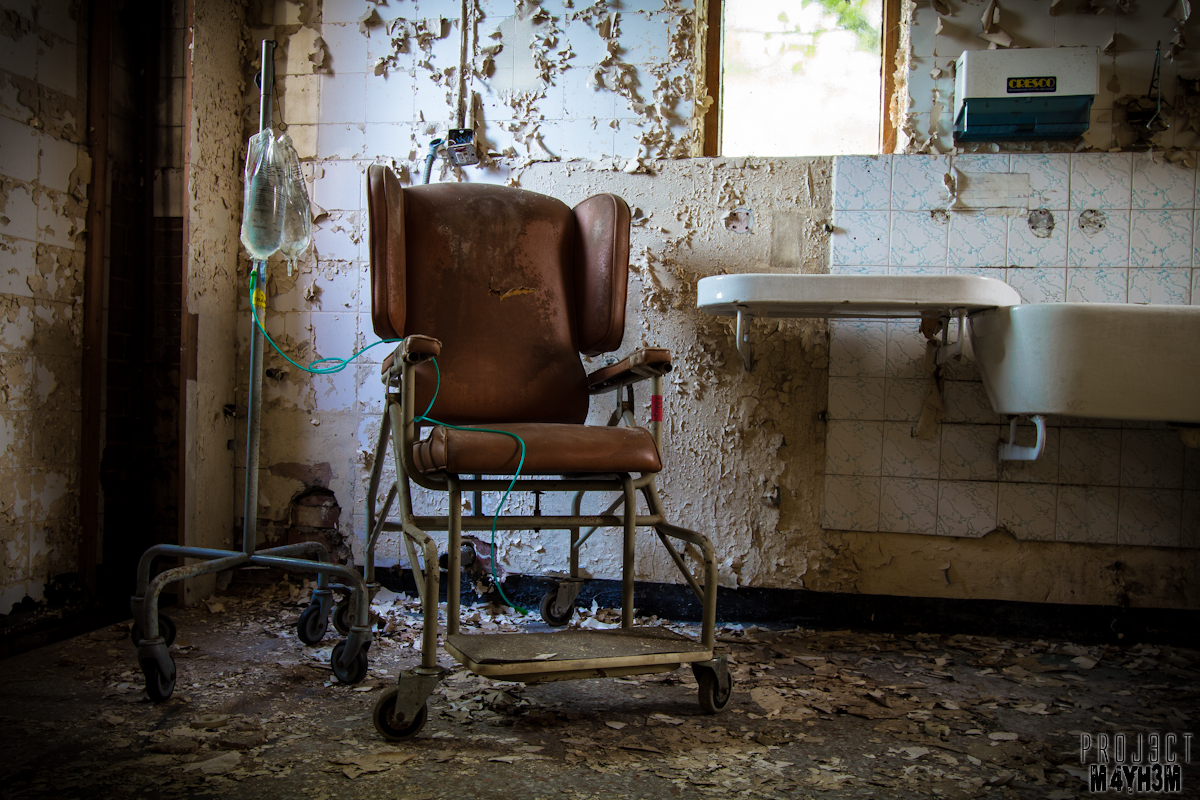 The Abandoned Mansfield General Hospital. Construction initially began on the 1.3 hectare site in 1889 and the hospital opened just one year later in 1890 with the intention of providing additional facilities to the local residents in light of outbreaks of diseases such as Typhoid, smallpox and tuberculosis which caused an increased demand for more hospital beds. In 1897 expansion was already under way with the addition of the Newstead Ward. By 1950 the hospital which originally opened with 5 beds in 1890 had grown to a size capable of offering 168 patient beds. The Hospital finally closed its doors to patients late in 1992 and eventually shut down completely early in 1993.

Mansfield General Hospital,at the time of this visit is owned by a local businessman who in 2005 was granted planning permission to develop the land into apparently however little redevelopment has since taken place and the buildings have been left to rot for around 20 years. According to a BBC article in July this year the council are currently spending some cash looking into possible uses of the land and are said to be considering repurchasing the site from the current owner.

I’d previously had 2 failed visits at this place and was really eager to see the inside for myself having viewed countless reports on the place. It has survived in pretty good condition compared to other Urbex spots which have perished either due to the elements or having the decay process sped up by vandals and metal thieves, the main reason for this is the keen attention of local residents and security who keep a watchful eye over the decaying building. We eventually made our way inside after taking probably the worst route which involved much more climbing than was probably necessary :). Once inside we split up and headed off in different directions hoping to track down the morgue. I wondered around happily capturing a few shots while Sam and Ryan searched the halls for the morgue. Sam was incredibly unfortunate, while exploring what appeared to be a basement area he proceeded to venture down a set of stairs pictured somewhere below. I didn’t see the incident for myself but he describes seeing what appeared to be a small doorway at the bottom of the stairs and when attempting to step of the stairs soon realised the doorway wasn’t actually small it was 50% submerged in the most god awful smelling water I have ever had the pleasure of being near. Needless to say he took an unintentional dip and ended up waste deep in water which can only be described as smelling like strong rotten eggs :/. Unlucky! Otherwise the visit was a success and we had a good explore for an hour or 2 before being caught by security. We didn’t locate the infamous PIR which everyone seems to keep tripping so I’m assuming we still have that excitement to come on our next visit to this place :).

After almost a year of negotiations Mansfield General Hospital was repurchased by the Local Council in June 2013 at great expense and was confirmed for demolition by DMCE Demolition. Demolition commenced in November 2013 at an initial estimated cost of £580,000 and was expected to take 6 months to complete. Costs increased by another £360,000 to to additional asbestos which was found on site and has a costly removal process. by February 2014 75% of the buildings were gone including the main 4 storey hospital block. By April 2014 demolition was complete. During the early states of the demolition works both long-eared bats and pipistrelle bats were found nesting and had to be re-homed.

You can check out a cool time-lapse of the demolition of the buildings here: Mansfield Demolition Time-Lapse.

Anyways on with the photos of what for me was one of my favourite explores to date: Mansfield General Hospital – Theatre in use Enjoyed this report? Then check out the revisit reports here:

If you’ve made it this far… thanks for reading / checking out the pictures. Leave me a comment below or hit the like button to let me know you’ve enjoyed the shots and to encourage me to keep posting more urbex photos

This made me so sad.I did my nursing training here.Also was a sister theatre.We worked hard ,but we enjoyed ourselves too.Met a lot of wonderful people.

Thanks for the comment, Its surprising how much positive feedback Ive had from past employees of this place! It must have really been a good environment to work in and certainly a good bunch of people based on the ones I have spoke to. Hopefully the building will be put to good use in due course 🙂

i would like to visit the hospital during the day light, i live in mansfield, could you email me please? (email removed for privacy issues)

Thanks for your comment, unfortunately I dont discuss specific access details with anyone I haven’t met in person I’ll drop you an email but unsure how much assistance I’ll be able to be.