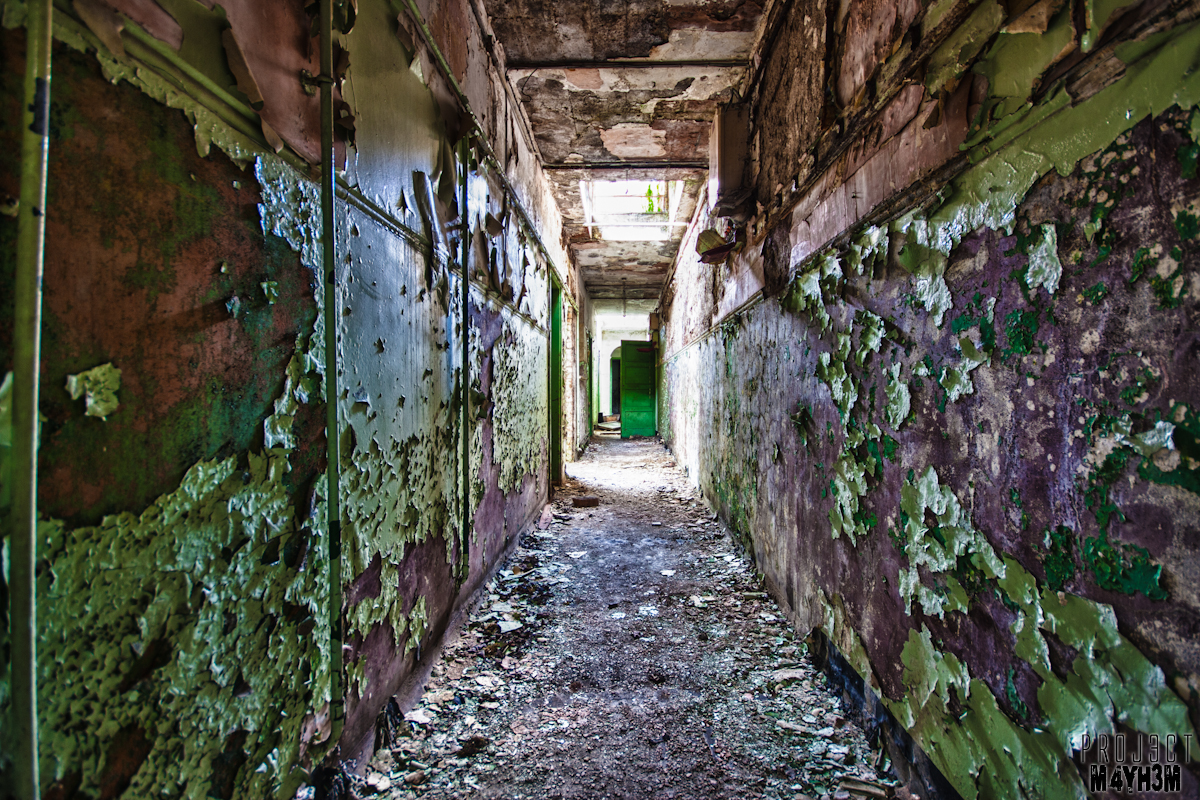 Visited twice within a week of each other. The first time I didn’t have a flash torch or a tripod so had to revisit with my gear 🙂 Highlight of these trips had to be when exploring with Harriet we scoped out the first floor then when going round the same rooms again Harriet screamed having just spotted the Creepy looking doll featured in the first few shots! Harriet swears that she looked in that room and it wasn’t there the first time, 45 minutes later after we’d been on the room it was there, place beneath a whole in the roof for an air vent which was illuminating it! I though I heard noises below while we were up on the roof but I cant say for sure! Either way it made for a weird storey to go along with the visit! Only really accessed this one building. I really liked the look of the abandoned streets full of houses but they were in a more secure part of the site and I was unsure on whether that part was still in use so we kept our distance! Lots of history on this place so scroll down if you want to skip right to the photos 🙂

RAF Driffield was a Royal Air Force station situated near Driffield in the East Riding of Yorkshire, England.

Situated between Kelleythorpe and Eastburn on the A614 road, there stands an aerodrome. In recent times, it was known as Alamein Barracks and used as an Army driving school. But the site was once a busy military airfield that operated for many years – spanning the development of aviation technology, and the history of the Royal Air Force.

The first aerodrome to occupy the site was made up of wooden and brick buildings, similar to those found at Duxford or Hendon. Known as Eastburn, No.21 Training Depot was the first unit to occupy the site from July 15, 1918, joined later by Nos. 202 and 217 Squadrons from March 1919. However, by early 1920, these units had disbanded, leaving a deserted airfield, which was removed some years later.

During the early 1930s, Driffield was selected for one of the RAF’s expansion scheme aerodromes, with construction work beginning in 1935.[1] This new airfield consisted of five large aircraft hangars, curved round the grass runways that stretched towards the north-west. Placed neatly behind these hangars were the many buildings that made up the camp. Opened in July 1936, RAF Driffield became home to a number of bomber squadrons. By 1938, these had been replaced by No.77 and No.102 Squadrons, and were eventually equipped with the twin-engined Armstrong Whitworth Whitley bomber.
[edit] World War II

Crews of both No.77 and No.102 Squadrons endured a series of training courses and exercises, so that on the outbreak of war, Driffield was ready for action.

The morning of September 4 brought great activity to RAF Driffield. Three aircraft from No.102 Squadron were to drop leaflets during that second night of the war. The fuselages of these bombers were crammed with large parcels of propaganda leaflets, wrapped in brown paper. Access that was normally difficult because of the retracted ventral gun turret, was now extremely challenging through the narrow gaps, between the parcels on either side of the turret. Flying at 15,000ft, the three aircraft crossed the enemy coastline and maintaining strict radio silence, flew down the Ruhr Valley and into France, releasing their load of leaflets, which were dropped through the aircraft’s flare chute. The following night of September 5, No.77 Squadron was given its opportunity to drop leaflets, when two aircraft repeated the operation.

On March 15/March 16, 1940, two aircraft of No.77 Squadron alone dropped 6,000,000 leaflets during a raid over Warsaw; a mission successfully accomplished, despite difficulties encountered with navigation and atrocious weather conditions. This was followed on March 19 by the first deliberate bombing on German soil, when Whitley aircraft from both Driffield squadrons joined those from RAF Dishforth, who together bombed the mine-laying seaplane base at Hornum on the Island of Sylt.

On Thursday, August 15, 1940 there was a German air raid on the airfield. At approximately midday, some 50 Junkers Ju 88 bomber aircraft attacked the aerodrome, killing 13 military personnel and 1 civilian , and destroying 12 Whitley aircraft. The 169 bombs dropped caused extensive damage, with many buildings, including all five hangars, being either damaged or destroyed.

Weeks later, the surviving aircraft from both Whitley squadrons departed, leaving Driffield to repair the damage, which remained non-operational until early 1941. With repairs to the airfield complete, Driffield saw a new role in the early months of 1941, as fighters replaced bombers, when No.13 Group Fighter Command took control of the airfield. Equipped with Spitfires and Hurricanes, the three squadrons based at Driffield patrolled the North Sea. April 1941 saw the return of No.4 Group Bomber Command and the formation of two new squadrons, both equipped with the Wellington twin-engined bomber. No.104 Squadron and No.405 Squadron RCAF (the first Royal Canadian Air Force bomber squadron formed) commenced bombing operations against Germany.

The first operation by No.104 Squadron, when six Wellington aircraft were despatched to bomb Bremen. One aircraft failed to reach Germany and returned to Driffield with a jammed rear gun turret. Flying at 16,000ft, four aircraft managed to release their bombs over Bremen, but were unable to see the results, due to the bright glowing haze of the already burning city. One other aircraft failed to reach the target due to intercom failure, but was able to bomb the secondary target of Wilhelmshaven. Despite both targets being heavily defended, all aircraft and crews returned safely. Other Wellington squadrons based at Driffield during the war were No.158 Squadron, No.466 Squadron RAAF (Royal Australian Air Force) and No.196 Squadron.

In 1943, RAF Driffield was temporary closed for the construction of three concrete runways, the longest stretching 6,000ft, linked by a perimeter track, along the length of which were situated the aircraft dispersals and bomb dump. The airfield became operational again in June 1944 with the return of No.466 Squadron RAAF, now equipped with the heavy four-engined Handley Page Halifax bomber. This unit began operations supporting the Allied invasion of Europe by bombing targets in the Normandy area.

August 12, 1944 saw the formation of No.462 Squadron,[6] a second Australian unit. During the months that followed, both squadrons joined forces to hit targets across Europe. On September 10th 1944, a small force of some 69 bombers, including 30 from Driffield, targeted the German occupied garrison and coastal defence battery at Le Havre. This was immediately followed by a much larger force of some 930 aircraft, which dropped 47,000 tons of bombs. The following day, the raid was repeated when 22 aircraft from Driffield, combined with a total of 218 from Bomber Command, again attacked the target. Ten hours later, the German garrison surrendered to allied ground forces. In December 1944, No.462 Squadron moved to Norfolk, leaving No.466 Squadron to fight on from Driffield. The Australians carried out their final raid of the war on April 25, 1945, when a force of 18 aircraft bombed gun emplacements on the island of Wangerange.

After the war, Driffield became home to a number of training establishments. The first, No.10 Air Navigation School, flew from 1946, equipped with Avro Anson, twin-engined aircraft, which were employed to fly student navigators on short three hour flights. The unit’s Wellington aircraft, endured flights of up to six hours, flying sometimes at night, down to the Channel Islands, along the English Channel and up the North Sea to Scotland. Replaced in 1948 by No.204 Advanced Flying School, this unit taught pilots how to fly the fast twin-engined de Havilland Mosquito fighter/bomber, an aircraft built entirely out of wood.

In 1949, the jet age reached Yorkshire, when No.203 Advanced Flying School formed at Driffield – replacing the Mosquitoes, which departed with their parent unit. This new school would be the first in the world responsible for teaching a new breed of pilot how to fly fast jet aircraft. There were two sections within the school: No.1 Squadron operated the Gloster Meteor – Britain’s first operational jet fighter, while No.2 Squadron flew the de Havilland Vampire.

Before climbing into the cockpit, students underwent four weeks of ground training, learning about jet engines, airframes and the different flying techniques associated with the new and much faster aircraft. This was followed by actual flight training, when pilots were taught basic manoeuvres, aerobatics, formation flying, instrument flying and navigation. Renamed No.8 Flying Training School in June 1954, the unit continued at Driffield before moving to Lincolnshire in July 1955.

That September, RAF Driffield reverted back to the role of a fighter station, when No.13 Group Fighter Command again took control of the airfield. During this period, Nos. 219 and 33 Squadrons, equipped with the de Havilland Venom night fighter, occupied the base until June/July 1957, when both units were disbanded. The following October saw the arrival of the Fighter Weapons School from RAF Leconfield, a unit equipped with a variety of jet aircraft, which itself departed in March 1958.

In 1957, the British Government announced that the RAF would deploy 60 nuclear intermediate range ballistic missiles. From November 1958, Driffield would be home to No.98 Squadron, which was equipped with three Douglas Thor missiles, each with a range of 1,750 miles and capable of reaching Moscow. With the length of 60ft, these missiles were stored horizontally on the ground and were erected only when ready for firing or during training exercises. Although the missiles were British owned, the nuclear warheads were still under American ownership. Accordingly, the United States Air Force maintained a sizable presence at Driffield. In good bureaucratic fashion, the RAF Launch Officer was expected to sign for the warhead after it had been launched, because technically it was then under British control. The missiles at Driffield were never used and the system was dismantled in 1963.

During the late 1960s, Blackburn Buccaneer naval aircraft were flight tested at Driffield, and in the early 1970s, gliders of No.642 Volunteer Gliding School also occupied the airfield, albeit briefly, while RAF Linton on Ouse had its main runway resurfaced. Sadly, there were to be no more happy landings, and in 1977, the airfield and camp were taken over by the British Army, who renamed it Alamein Barracks. By the early 1980s, the runways were removed and the hardcore used in the construction of the Driffield bypass. The control tower and air-raid shelters disappeared, while the hangars that protected aircraft for many years were converted to protect Government surplus grain from the elements.

The army used Driffield as a driver training centre, until RAF Leconfield (which was also taken over by the Army in 1977) was enlarged to accommodate those who lived and trained at Driffield. In 1992, the RAF regained ownership of this historic aerodrome, naming it: RAF Staxton Wold – Driffield Site. Once again, the RAF ensign flew over Driffield, but not for long. In 1996, the RAF itself transferred its own personnel and facilities to RAF Staxton Wold, thus bringing an end to 60 years of service. On June 28, 1996, the RAF ensign was lowered for the last time, bringing to an end RAF Driffield. Hi there. I was wondering about going to have a look at Driffield. Is it ok to just wander round or do you need to get permission from anyone?

Hi Andy, sadly this like many of my other visits was a none permission trip… I also think part of this site is still utilised by the RAF you could always try asking but from my experience land owners are not often very inviting to photographers, its a shame really… all the best and thanks for your comment 🙂