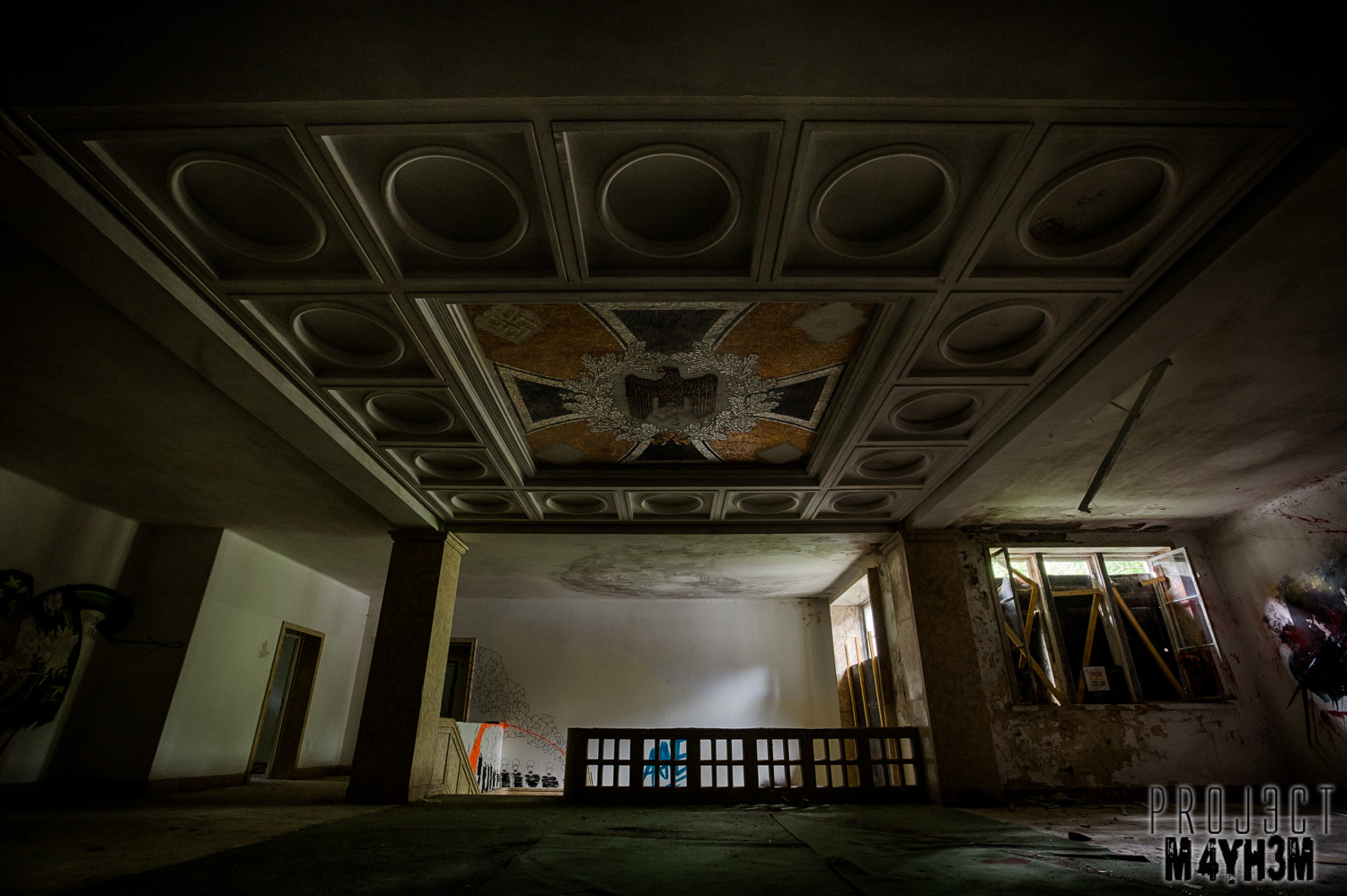 Krampnitz Kaserne a military Barracks not too far from Berlin in Germany is made up of around 50 separate buildings most of which served as storage or accommodation blocks. The complex was established in around 1937 as part of the rearmament period and was used by the Nazi’s primarily as their main Cavalry base until it was abandoned by the Germans on 26th April 1945.

The day after the Soviets took control and it served as a Russian base for the 35th Guard Motor Rifle Division until its closure in 1992 following the dissolution of the Soviet Union.

During its history Krampnitz has featured as a location for the filming of various movies including Inglorious Basterds and Resident Evil among others (Source: IMDB)

Famous for the ‘Adler’ building, a non-descript building which forms part of this huge base, which contains a ceiling decorated with a detailed mosaic ceiling depicting the Nazi Parteiadler carrying a Swastika. This was the focus of our visit. The authenticity of the Ceiling decoration has been called into question for a number of reasons; Nazi symbolism was banned in German after the war and the majority of them were known to have been destroyed. Also the Soviets, having occupied the base after the Germans fled are also unlikely to have retained the feature. One thing is for sure someone has gone through a great deal of effort to protect this area of the site as it is sectioned off top and bottom with substantial metal blast doors…

Visited with  Andy K of Behind Closed Doors, Lowri, Scott of Darbians photography, Stussy and Carl. The weather wasn’t not on our side. I recall setting off from the car in sunglasses and a vest when within minutes we were hit with a substantial rainstorm. We ducked inside one of the first buildings we came across and fired off a few shots before we heard footsteps outside. We saw what appeared to be 2 men patrolling the exterior but they did not appear to be aware we were inside. After waiting it out we moved on in search of our intended target. After moving between buildings across the site trying to avoid areas we had seen patrolled by vehicles we finally made it to the Adler building.

By the time we got to see the ceiling we were loosing light fast! The storm has persisted and we were all soaking wet through.  We shot what we could with available light and a few used LED light panels and then we made our way back to the car the same route we used avoiding the cars inside the complex parked by the gate. If you’ve made it this far… thanks for reading / checking out the pictures. Leave me a comment below or hit the like button to let me know you’ve enjoyed the shots and to encourage me to keep posting more urbex photos 🙂